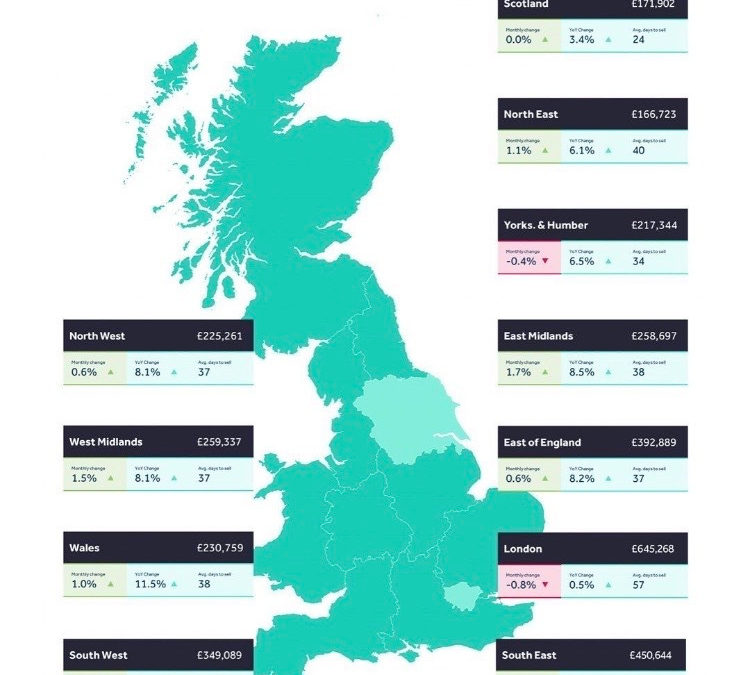 House prices have risen sharply across the UK, driven by an increase of more than 15% in the year to May in the North West of England

Official figures show property prices also rose at a rapid rate in Scotland, Wales and the North East of England.

The Office for National Statistics (ONS) said the average UK home cost £255,000 in May.

The UK housing market has not only maintained its strength in the face of the Covid-19 restrictions, it has continued to flourish even through the toughest times – offering respite in the present and hope for the future.

Earlier this month we were greeted by news from Halifax that the average house price had increased by 9.5% in the year so far to May. This is a huge leap considering the context of a restricted housing market and took many by surprise.

Since then, the latest figures from Rightmove have confirmed that this upward movement is happening and provided more information on which regions in particular are seeing the most impressive growth.

The property portal has reported that the average UK house price reached a new all-time high in May 2021, thanks mainly to demand that continues to massively exceed the available supply.

This issue is most acute in the North – particularly in the North West – which sees a far greater imbalance between supply and demand than anywhere else, including London. The gap between house prices in the capital and the North is itself at a record low according to the same report.

The latest UK House Price Index from Hometrack also shows that the London market is losing out to cities in the North. The report shows that despite average house price inflation of 4.1% year-on-year across the whole country, London’s figure is just 1.9% – making it the slowest growing region for the sixth month in a row.

In contrast, Manchester is growing at 6.8% year-on-year, putting not only far above the national average, but also demonstrating that property prices in the North West’s major market are inflating more than three times as fast as in the capital.

It has been evident for a long time, but the North West is where property investors should be looking for maximum returns.

Of course, investors are concerned with more than just house price growth and capital appreciation. It is also important to consider where the strongest rental markets can be found if you are looking to invest. Fortunately, the current market makes it easy for investors as the rental market is following suit with the housing market as a whole.

Returning to Rightmove, we can see from its latest Rental Price Tracker that the North West once again leads the way.

Rents across the region have risen by 4.4% over the last year, with that rise even higher in markets like Manchester city centre. Furthermore, the North West as a whole has seen rents rise by more than 15% over the past five years.

In contrast, the research shows that asking rents in 65% of London are actually lower than they were five years ago. That is a major disparity and helps to illustrate a major reason why so many investors have given up on the capital city in favour of regional markets like Manchester and Preston.

Finally, to take Manchester as an example, it seems that the gap will only open up further in the coming years, with JLL’s Residential Forecast 2021 report showing projected rental increases of a further 13.1% by 2025.